The use of aircraft for active atmospheric intervention operations is a method developed primarily in the United States, and involves modifying aircraft so that they can carry silver iodide in the clouds.

Depending on the aircraft and the type of active intervention activity in the atmosphere, the planes are modified to be able to carry smoke torches on the wings and ejectable cartridges on the lower part of it.

Thus, interventions on convective systems with the potential to produce hail, using aircraft, are performed by two methods:

Aircraft crews have to work very well with operational ground meteorologists, because during the hot season, convective systems can reach strong development in a very short time, and this poses a high risk to the aircraft and crew.

Due to the unpredictability of the evolution and the high speed with which the flight conditions change, this method presents a high degree of risk, but with well-trained pilots, high-performance equipment and well-trained meteorologists, it is an effective method for both hail and precipitation stimulation.

The efficiency of this technology regarding anti-hail is about 60%. 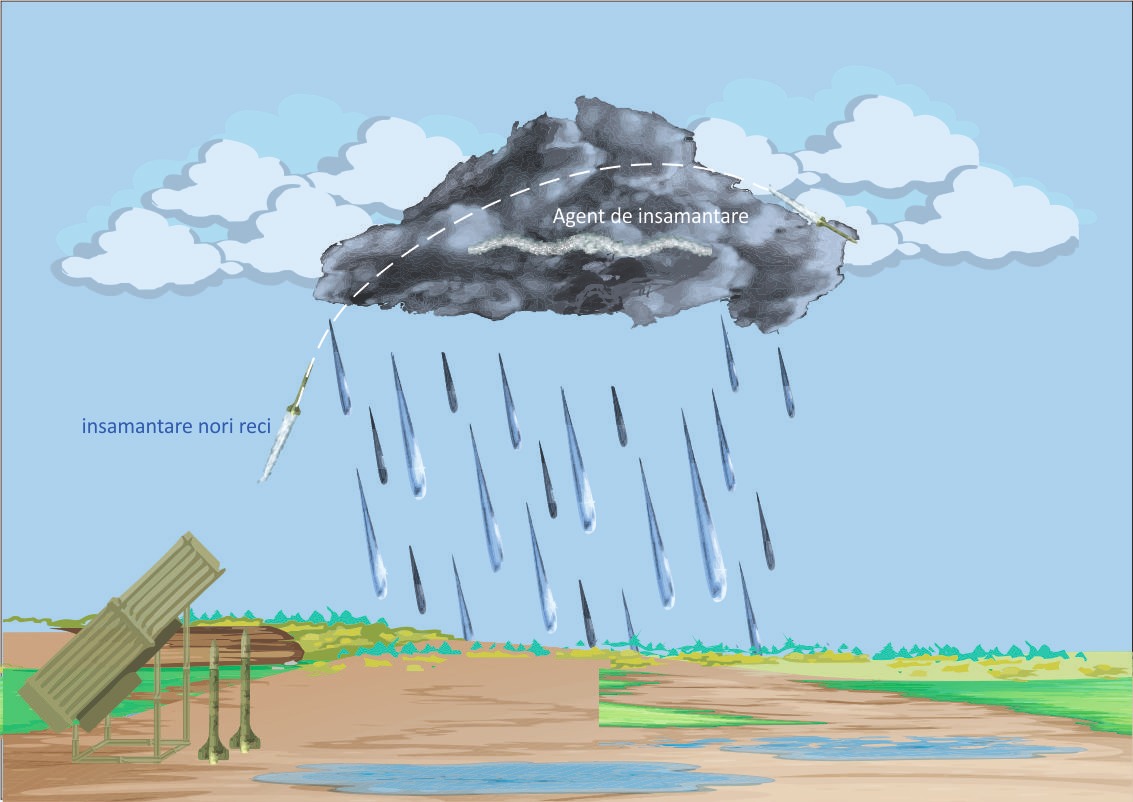 The use of anti-hail rockets is one of the most effective ways of active intervention on hail-bearing cloud systems. In this way, the silver iodide is dispersed continuously and evenly on the upward trajectory of the rocket, in a well-defined time interval.

The missiles used have special compartments, located at their upper end, and in this compartment there is silver iodide.

It can also be included in the composition of the rocket engine, the results being better. This method is a system method and theoretically for an optimal coverage of a protection surface a sufficiently large number of Launch Points is required, so it is estimated that for an area of 500,000 ha 20… 25 launch points are needed, equipped completely and having an adequate stock of rockets.

Basically, for a higher economic efficiency of the system, it was found that using 10 Launch Points can be ensured good protection, on an area of 200,000 ha.

Active interventions in the atmosphere on cloud systems to combat hail, using specialized missiles, have been used successfully for a long time in China, Argentina, Brazil, the Russian Federation, Moldova, Georgia, the Trans-Caucasian Republics, Bulgaria, Serbia, Croatia, Slovenia, but are not used in Western European countries, primarily due to crowded air traffic and high density of flight lanes.

In the recent decades, with the intensification of climate change, both researchers and farmers have chosen this method of active intervention in the atmosphere, not only to increase rainfall and to combat floods, but also to minimize the devastating effects of hail. The efficiency of this technology regarding anti-hail is about 75%.

The terrestrial generator method is a system method, and in order to protect an area of interest, the positions and number of generators must be chosen carefully. Thus, a series of studies are required prior to the design of such a system.

Terrestrial generators used for active interventions in the atmosphere operate with a mixture of substances, which produce aerosols containing silver iodide.

The possibility of terrestrial generators to disperse the seed material at the appropriate level inside the target cloud is reduced compared to the technology of missiles or aviation. Very good results are obtained for active interventions in the atmosphere to increase the amount of precipitation in the form of snow, in mountainous regions, where ground temperatures are already close to freezing temperatures, the generators being practically inside the clouds.

Active interventions in the atmosphere using terrestrial generators are done with much lower efficiency than in the case of the use of missile systems or aircraft, but a great advantage is the cost of operating this method.

Dispersion of artificial condensation nuclei (silver iodide) with the help of terrestrial generators, in the areas of development of convective clouds, is a preventive method of combating hail.

Atmospheric turbulence and convection phenomena can transport condensation nuclei from the vicinity of terrestrial generators inside convective clouds, to the level where ice nucleation occurs, reducing hail dimensions, but the method does not guarantee the exact area where the condensation nuclei will reach.

The efficiency of this technology regarding the control of hail is about 40%. 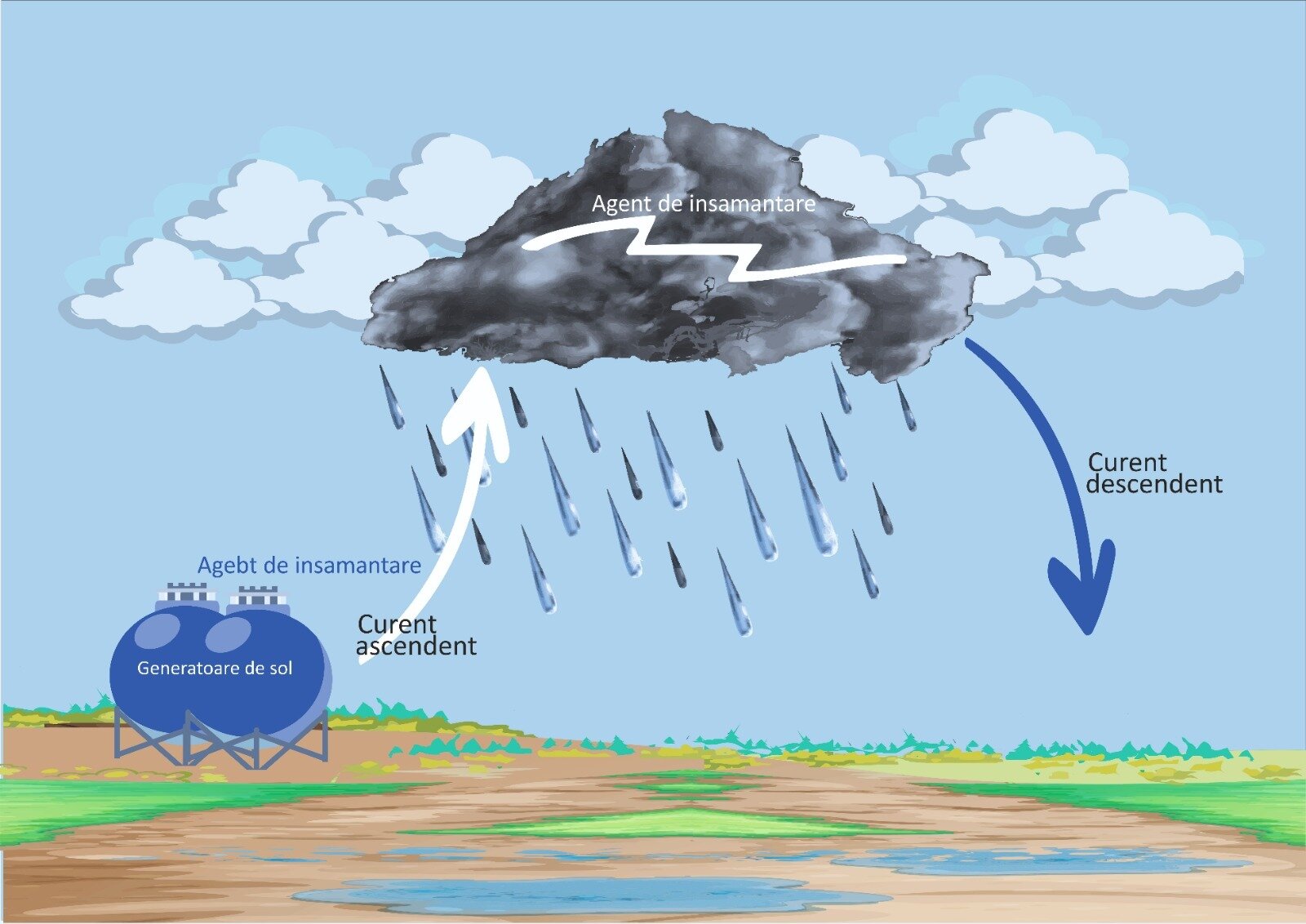